Today I have the pleasure to announce the cover reveal for Alex J. Cavanaugh's latest book, CassaStorm!

If you don't know Alex, you must live on another planet. He's the fabulous ninja/author/musician the blogging community have all gotten to know and love over the past few years. He's committed to helping others promote, supporting other artists in any way he possibly can, all while maintaining a positive outlook through thick and thin (not that I know of much 'thick' because it's pretty hard to catch him having a negative attitude about anything, he's THAT fabulous).

Anyhoo, back to the task at hand. TADA! 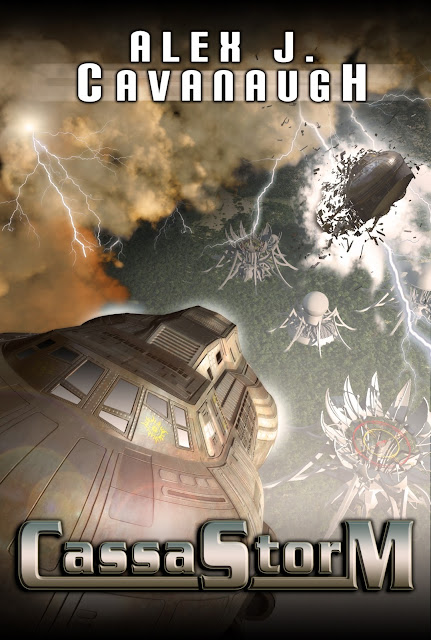 A storm gathers across the galaxy…

Byron thought he’d put the days of battle behind him. Commanding the Cassan base on Tgren, his only struggles are occasional rogue pirate raids and endless government bureaucracies. As a galaxy-wide war encroaches upon the desert planet, Byron’s ideal life is threatened and he’s caught between the Tgrens and the Cassans.

After enemy ships attack the desert planet, Byron discovers another battle within his own family. The declaration of war between all ten races triggers nightmares in his son, shaking Bassan to the core and threatening to destroy the boy’s mind.

Meanwhile the ancient alien ship is transmitting a code that might signal the end of all life in the galaxy. And the mysterious probe that almost destroyed Tgren twenty years ago could be on its way back. As his world begins to crumble, Byron suspects a connection. The storm is about to break, and Byron is caught in the middle…

And if you missed Alex talking about writing and music here this Wednesday, here's your chance to catch up!
Posted by Jessica Bell at Friday, February 22, 2013