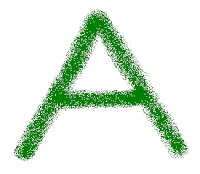 Can you believe it's been a year? Already? Wow.

So this year, Nicole Ducleroir and I are going to be playing together in the A-Z April Challenge. :o) Now, now, no kinky ideas, what I mean by that is, we are both going to be writing a paragraph based on the same prompt. These prompts are going to be emotions (nouns, not adjectives). So, for example, the prompt for A (today) could be 'Acceptance' (it's not, btw), and then we would both write a paragraph showing someone feeling this emotion. But we're not going to tell you what it is. That's for you to decide, and GUESS in the comments. Sound fun? I think so ... :o)

So let's begin with today, with what other letter but 'A', yes? Read the paragraph and see if you can guess which emotion/feeling it is trying to portray that begins with the letter 'A'. And then hop over to Nicole's to read her interpretation of the same emotion/feeling.

(PS: please don't judge my writing skills on these snippets. I'm seriously doing them off the top of my head!!!)

She stood at the bottom of the pyramids, sweat running between her breasts, soles of her feet burning from the two hour trek, shoulders aching from her heavy rucksack, nose stinging from the scortching sun, but ... she didn't care. In front of her was what she had been waiting all her life to see. The pyramids of Giza. Her eyes drew to their hot, firm beauty as if the pyramids themselves were extracting all her pain. She lifted her hand to shield her eyes from the sun. She could not break her stare. She stood there, jaw open, wondering how she kept away for so long.

So, can you guess the emotion (a noun) depicted in this piece that begins with the letter ‘A’? Please nip over to Nicole's blog to read her interpretation of our ‘A-prompt word. Here’s the link!

PPS: winners of contest are below :o)