The Artist Unleashed: THE SECRET TO CREATIVE SUCCESS by Derek Murphy

In a speech about creativity, John Cleese begins by admitting creativity is "literally inexplicable"—it just can't be explained. Freud denied that psychoanalysis could shed any light on creativity. Creativity is not a talent, he continues, it is a way of operating.

It's not an ability that you either have or not have, and it is absolutely unrelated to your IQ.

Cleese concludes that creativity is a way of putting yourself in a certain mood—an "ability to play" with ideas, not for any immediate practical purpose, but just for fun.


I disagree on a pretty fundamental level.
Posted by Jessica Bell at Wednesday, April 30, 2014 5 comments:

A Small Cry for Help 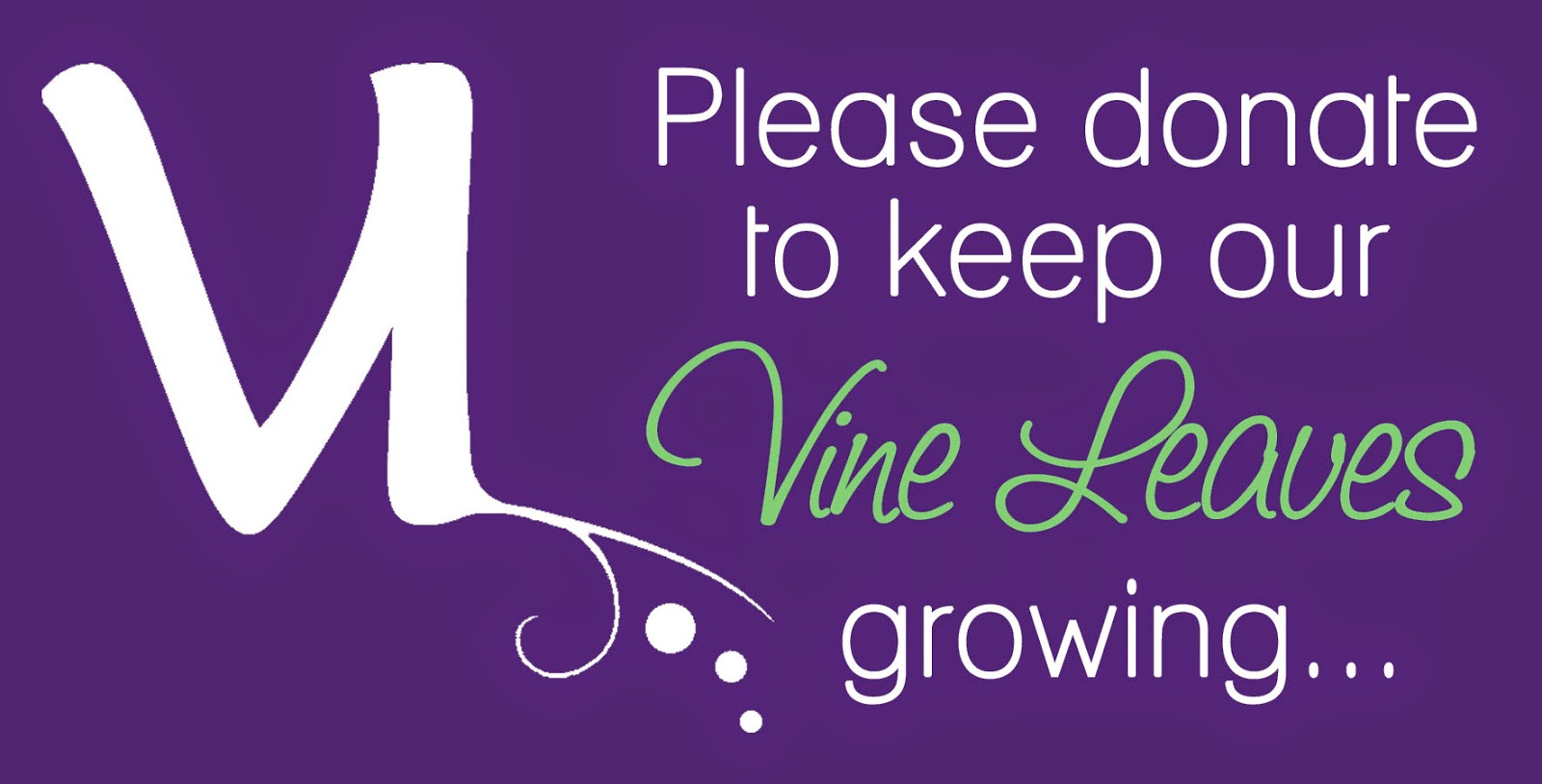 If you've been following me for a while, you know that since December of 2011 I've been running a literary magazine called Vine Leaves Literary Journal.

You may remember my post, Behind the Scenes at a Literary Journal, where I broke down a lot of tasks and costs. Well ... it's getting so much bigger than this now. We are getting more than 4000 unique views a month and the compliments via email take my breath away. Which is pretty damn excellent for a magazine running only a little over two years.

But the bigger we get, the more we start to scrape the bottom of the money barrel. Especially since we are now publishing single-author vignette collections through Vine Leaves Press and offering a 70% royalty on both paperback and eBook. We are big (HUGE!) supporters of writers, so anything less just feels like robbery. But this means we don't make money. Because any money that we receive goes straight back into the journal and paying contributors for their work.

Our piggy bank is running very low. I have tried to get grant support through the Australia Council for the Arts, but in order to be eligible, I would have to publish only Australian literature. I am not willing to do that. There is a world of amazing writers out there. I can NOT make that sacrifice for arts funding.

Please do us the honor of donating a few bucks to our mission: to give the vignette, a forgotten literary form, the exposure and credit it deserves.

Just think of it as buying two coffees one morning, instead of one, for the greater good of the vignette!

If you think you can spare a few bucks, you can easily donate HERE.

Thank you so much!

EASY TWEET:
Could you spare the cost of a coffee 2 keep a much loved #litmag on its feet? @VineLeavesLJ need help! Please donate: http://goo.gl/Y8BO81

Sign up to my newsletter and receive Book #1 of the Writing in a Nutshell Series, Show & Tell in a Nutshell, or Muted: A Short Story in Verse, for FREE.
Posted by Jessica Bell at Monday, April 28, 2014 8 comments:

The Artist Unleashed posts have moved to a new domain. Please click HERE to read the rest of this post and for the opportunity to comment. Just search for the title of the post in the search bar on the new site.
Posted by Jessica Bell at Wednesday, April 23, 2014 2 comments:

The Artist Unleashed: WRITING IN A FOREIGN LANGUAGE (HOW DORIS LESSING HELPED ME WRITE IN ENGLISH) by Helena Halme

The Artist Unleashed posts have moved to a new domain. Please click HERE to read the rest of this post and for the opportunity to comment. Just search for the title of the post in the search bar on the new site.
Posted by Jessica Bell at Wednesday, April 16, 2014 5 comments:

Email ThisBlogThis!Share to TwitterShare to FacebookShare to Pinterest
Labels: Helena Halme, The Artist Unleashed, The Englishman, Writing in a Foreign Language

The London Book Fair 2014: What Went Down

As most of you know I spent last week in London for the 2014 Book Fair and I had the most fabulous time!

I met so many people that I have gotten to know over the years through the Internet, and met a bunch of fabulous authors for the first time, including Hugh Howey! (Whisper: He's such a spunk.) If you've never been to a book event like this, I totally recommend it. I have to say it's the best career investment I have made in a really long time.

Note: I've included more photographs from the event, and of people I had the privilege to meet, below the post if you'd like to see.

I spent most of my time in an area called the Author HQ where a variety of seminars and workshops took place. Subject matter varied from things like "Know Your Rights," and "The Hallmarks of Self-Publishing Success," and "The Principles of Book Cover Design." Some were useful, others not so much, as I think they were a bit too geared toward the complete beginner. Hopefully next year they will have more seminars that are a bit more meaty in content.

Although I didn't learn anything new about being an indie author, I did discover that I'm already doing everything "right." And it was definitely great to have that confirmed. I now feel confident I can continue doing what I've been doing all along, and not worry about whether there is anything I am missing.

I have to say that the BEST seminars (for me) were the ones that included speakers from The Alliance of Independent Authors (Orna Ross, Ben Galley, Joanna Penn), and an interactive interview about Self-Publishing with Kobo Writing Life's Diego Marano, and author-extraordinaire, Hugh Howey. I came away feeling enthused, and quite comforted, regarding my career choices. I have to say, I hold these authors in very high esteem. Not because they are successful, but because they are so genuine, kind, honest, and approachable, and they do not behave in any way superior to anyone. There is a lot to respect right there. Nothing has "gone to their heads" so to speak. They are just like "us".

I also really enjoyed the seminars with bestselling authors, Bella Andre, Barbara Freethy, and Liliana Hart. I learned a lot about "branding" covers (i.e. to be sure they feature something that is easily recognizable as "you".) I've done it with my nonfiction, but never really thought about doing it for my fiction. So that was quite an eyeopener.


The "Opening Up To Indie Authors" book launched at the Kobo booth, too. The book was written by ALLi members, Debbie Young and Dan Holloway, and edited by the founder Orna Ross.

As Dan Holloway writes on his blog:


"The book is more than just an essential campaign document and rallying cry. It’s a guide to working with every sector in the global literary sphere, from bloggers through prizes and bookstores to festivals, making the case for the inclusion of indie authors, helping indie authors to understand the industry and helping the industry to see why it needs indie authors."

You can read more about the launch HERE.

To top all this awesomeness off, I also attended a party sponsored by Amazon to celebrate the 2nd birthday of ALLi, and I had the privilege to read from my novel, Bitter Like Orange Peel, alongside some other magnificent authors: Dan Holloway, Carol Cooper, Jerome Griffin, Polly Courtney, Paul Murphy, JJ Marsh, Piers Bearne, Mark Speed, and Orna Ross.

Thank you to Dan for catching it on video for me!

So ... that was my week. (Phew!) Have you ever been to an event like this? Was it a good experience? Why?

Sign up to my newsletter and receive Book #1 of the Writing in a Nutshell Series, Show & Tell in a Nutshell, or Muted: A Short Story in Verse, for FREE.
Posted by Jessica Bell at Monday, April 14, 2014 6 comments:

Off to the London Book Fair!

So guess who is off to the London Book Fair? Me!

I will be on hiatus all next week. But I'll definitely be Tweeting and Facebooking during the event if you're interested in updates and photos, etc.

I'll also be doing a reading from Bitter Like Orange Peel on Wednesday night at an Alliance of Independent Authors event. I'll try and get someone to video it for me, so I can share it with you.

Have a great weekend, folks!

Sign up to my newsletter and receive Book #1 of the Writing in a Nutshell Series, Show & Tell in a Nutshell, or Muted: A Short Story in Verse, for FREE.
Posted by Jessica Bell at Friday, April 04, 2014 1 comment:

The Artist Unleashed: THE 5 BIGGEST RISKS I’VE TAKEN AS AN AUTHOR by Rachel Thompson

I’ve written a lot of blog posts. A lot. A lot, a lot. Yet, nobody has ever asked me before what the five biggest risks I’ve taken as an author are, til now. So thank you Jessica for the opportunity to write for you and for making me dig deep.

1)              Telling my real story.  I started blogging in 2007-ish, and mostly it was a way to connect with family and friends far and wide. However, I soon developed my ‘voice:’ a sarcastic look at relationships, love, and all the ups and downs that go with that.

Just a heads up. Though I'm not participating in the April A-Z Challenge this year through my personal blog, Adam Byatt and I are participating through Degenerate Dictionary. So, if you are participating, we'd love to see you over there! Click the image to be directed to DegDic: 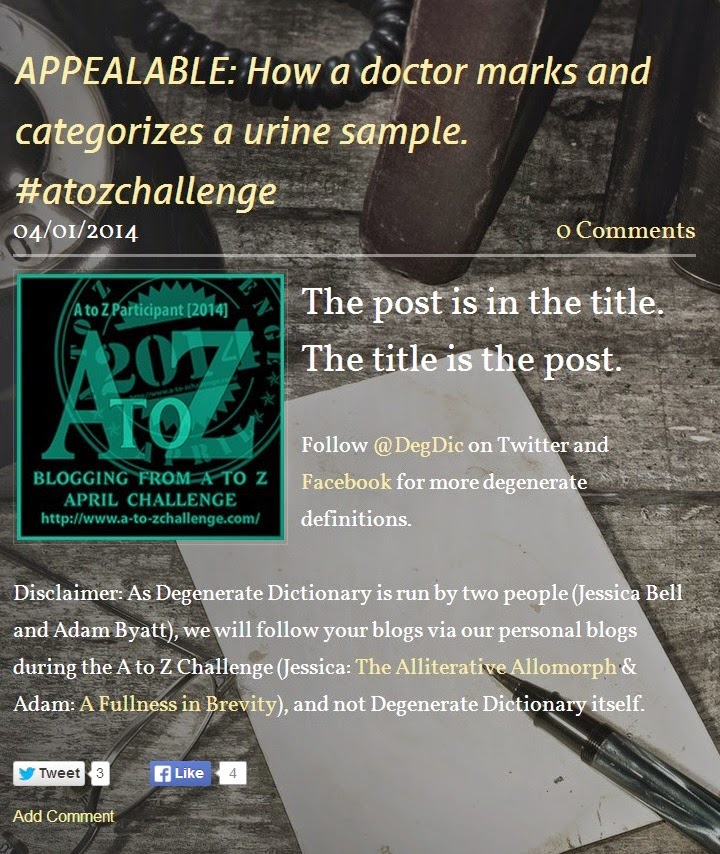 CLICK HERE to subscribe to Jessica's newsletter. Every subscriber will receive Book #1 of the Writing in a Nutshell Series, Show & Tell in a Nutshell, for FREE. And be the first to know about new releases and giveaways!
Posted by Jessica Bell at Tuesday, April 01, 2014 4 comments: