Will people really want to read this? Are people generally scared of the truth? 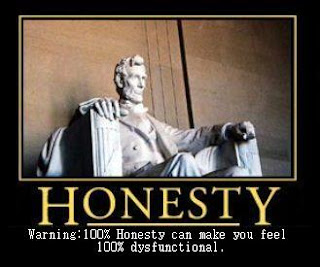 These are the questions I ask myself every day.

I've been hit with an irrational angst that everyone is going to hate my book, because I love my book. And I'm the type of person who loves things others don't.

My book is honest. It's raw. It doesn't glorify ANYTHING.

It digs deep into what people think, but never say out loud. It's very real and I think that is going to scare people away. And don't forget, it's literary, not commercial, so it's not going to be everyone's cup of tea, either.

Every feeling I flush into my main character, Melody, comes from somewhere within me. So I'm even scaring myself. I do think Melody is likable, but she's also very depressed, especially in the first third of the book, which I think will sometimes make readers cringe. But anything that makes people 'feel' something is a job well done, right? I hope so. That's what I keep telling myself.

Melody thinks things that a 'normal' person would scold themselves for even contemplating. They'd flush the thought out of their mind and get on with their 'jolly' day. Melody doesn't do this. She thinks what she wants to think. And some things are quite tragic, and I suppose, unlikable.

I even shocked myself last night when I was revising. Would you like to see what it was? Ok. *deep breath*
So, first, a little background: Alex is Melody's husband. Melody doesn't know if she loves him anymore. And to top it off he's been treating her like shit, so any moves he makes to make amends she doesn't care much about. Melody is lying on the couch cuddled up with her daughter, asleep, when Alex gets home from running some errands, or so he's led her to believe, after having another argument. He sits beside her and touches her head ...

“What?” I mouth, twitching my head from his grasp. He bends down and kisses an escaping tear from my cheek. I want to smack his head away. Make his nose bleed. I want to tell him he’s a selfish asshole and to leave me alone, that he can’t just give me a kiss and expect everything to be alright again. Or, if he can’t do that, to explain what the hell is going on in his life to cause his behavior to fluctuate so much. I want to know why he seems to hate me. I want to know why I hate him. And how I can make it stop. I want … I want know what happened to ‘happy marriage’.

“We have to talk,” I whisper, trying to sit up without waking Tessa. “We have to—”

Alex puts his fingers to my lips, nods his head, and kisses me between my eyes. He smells sweaty. His stubble scrapes my nose. I want to stick my tongue into his mouth. Fuck my anger away. Treat him like a one night stand. Then throw a couple-hundred Euros on his bedside table and walk out without saying goodbye. Then I want to have a long hot shower. Scrub away the dirt, the pain, the frustration — my irrational despair. Then call him and ask him out on a date. To start again. Without a past.

So, there you are. I'm trying really hard not to censor myself. Because if I do, then my writing won't be real. It won't be honest. And it won't represent what I want it to represent. I'm even worried about posting this on my blog today. Afraid of what you will all think. I suppose, though, that's what it's all about, isn't it? Just like my publisher said, when she quoted me Eleanor Roosevelt, "I must do that which I fear most."

So, I'm taking the plunge. I'm afraid. And I'm laying my fear out for you all to see. So please, if you have any criticism, don't be afraid to express it, but tread lightly, because today I just feel like crying.

Have you ever had second thoughts about what you write? Have you ever censored yourself? If so, how did it feel? And what was your final decision?