Those of you who've know me for a while know that my parents are musicians. If you are familiar with the Melbourne music scene in the 90s, you might recognize the name Hard Candy.

Hard Candy was formed by my parents, Erika Bach and Demetri Vlass in 1992 after their goth/grunge band 'Ape the Cry' split up. The 80s' were over and the guitar was back in fashion, so they turned up the volume and quickly got themselves back into the Melbourne music scene with their debut CD 'Tattoo'.

In 1999, after various factors split Hard Candy up, my parents moved to Ithaca, Greece. Since then my mother has been writing and recording music under the name Lola Demo. And today I'd REALLY appreciate it if you stopped by her website and had a listen, and maybe even SHARED the link for others to see/hear.

There are two songs on her latest CD that are just so catchy that I've been playing them over and over all weekend. And dancing in my lounge room to them and wishing I'd written them myself! And for me to play my own mother's music over and over again is saying something. For the first time in years I'm listening to these songs without associating them with her being "my mother". I'm so excited about this album!

Care to take a look? My favourites are: Stain On Your Jeans and Nose Bleed.

Please Tweet, FB, etc, as I'd LOVE my mother to gain a little exposure again. It's been a while. Please tweet with @MsBessieBell and/or #LolaDemo. Pretty PLEEEAAAAASSSEEEE with a cherry on top? :o) 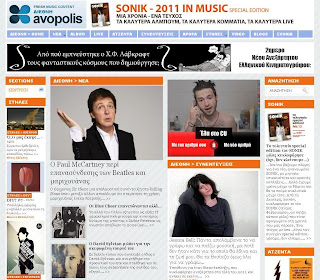 PS: I'm featured in a major Greek music mag today! Oh, and even better, I'm on the front page right next to an article about Paul McCarteny!!!
<<<<<<
Seriously never thought I'd see my face on the same page as his in the media! I think it's time for a SQUEE, but that would be a bit childish, yes? ;o) It's all in Greek but if you go to Google translate it does a decent job.