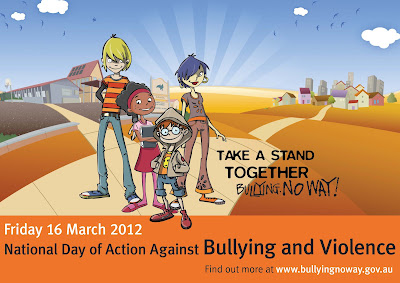 Today is the National Day of Action Against Bullying and Violence, and a few fellow bloggers are joining forces to take a little action. As Sheri Larsen, who initiated the idea, said, there's strength in numbers, right? So if you have ever been bullied, know someone who has been bullied, or simply believe in taking action for a worthy cause, today is the day to tell the world, or even your next door neighbor, to take a stand.

My experience:
I was never beaten, pushed or called names ... well, I was sometimes, especially on out-of-school-uniform days when I'd come with rainbow-coloured tights and get called a fruit-loop -- little did they know it had a double meaning. But ... I was ignored and manipulated and tricked by other kids, which is just as horrible as being picked on. I was in tears at the end of every single recess and lunchtime. Either due to kids blatantly running away from me, or from being coaxed to be 'it' in hide-and-seek and having everyone run off on me when my eyes were closed. Sometimes, though, kids would let me play with them. But it would always be a role-play game in which I was someone such as a victim of a kidnapping. Of course, that entailed many hours of loneliness in the school yard, because "it was realistic to the situation". For the majority of the time, however, I just sat on a school bench, watching my feet swing backward and forward. No one liked me because I was shy.

I was alone for pretty much my entire school life. Even in high school. Because my shyness was mistaken for snobbishness. Until one day I started dressing like a goth. Then everyone was just too apprehensive to approach me. But at least then there was a reason to be ignored. And it felt good to have control of it. At least that's how it made me feel then.

No kid should feel this way in school. It should be an environment in which children are able to grow in every aspect of living, not just educationally. Luckily, I was strong enough to overcome such ill-experiences, but there are young people out there who aren't as strong as others. Bullying can have all sorts of effects. Even suicide. And I wouldn't be surprised if it is linked to adult depression either.

Let's take a stand. Together.

Stand up to a bully today and make a difference. Even the smallest difference counts.

Email ThisBlogThis!Share to TwitterShare to FacebookShare to Pinterest
Labels: National Day of Action Against Bullying and Violence