Okey dokey folkies, this title blog fest on Saturday was VERY interesting, don't you think? I got so many different reactions, plus some that I hadn't even considered - especially with the titles for my memoir. 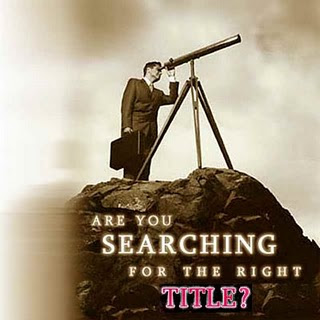 Today I'm going to show you the results, tell you what my working titles are, and what each book is about. One thing I will say now though, is that the title that got the most votes out of everything, PLEASE DON'T WEAR YOUR EYEBROWS TO SCHOOL AGAIN, was chosen because you thought it would be a funny book. The FUNNY thing with that is, the book is the complete opposite of funny, and I considered that title for what it metaphorically represents in the story. You can read a short excerpt of how it is used in the introduction of my memoir here, if you feel like it.

Anyway, here are the results:

WIP 1 (women's/general fiction)
Curiosity Cured The Kit = This is my working title and it got only 8 votes.
Secrets + Lies = Truth = 8 votes
Bitter Like Orange Peel = 12 votes
The Roger Thing = 3 votes
More Than Absence = 11 votes
Now here is my UNPOLISHED plot summary:
Two half sisters, Kit and Ivy, decide to search for their father, Roger. Their mothers, Ailish and Eleanor, who are best friends, do not want to get involved and leave them to fend for themselves. Kit is convinced that the reason for his absence all their lives is due to him being involved in the secret service. Ivy, who lives on the other side of the world, and who is in the midst of finding her feet again after a divorce, supports Kit's decision to find Roger, but couldn't really care less about it until evidence is revealed that supports Kit’s theory. All Ivy's life she has just believed he was unable to commit and abandoned her and her mother without any guilt. However, when the sisters' effort to find leads to Roger’s whereabouts, digs up a tangled mess of secrets and lies that Ailish and Eleanor have bottled up for decades, not to mention another sister they didn’t know about, their own relationship becomes threatened. Will their father live up to their expectations? And Is revealing the truth worth destroying what family they already have?

Now what title would you choose?
WIP 2 (memoir)
We're Not Ordinary People = This is my working title and it only got 3 votes.
Until I'd Fall Asleep With My Teeth Clenched = 3 votes

Looks Like Candy, Tastes Like Music = 16 votes
Basis of story:
This memoir is about being the only child of gothic rock musicians, focusing primarily on my relationship with my drug-addicted mother, and my experiences dealing with her drug withdrawal, anxiety, panic, violent rages, erratic mood swings, etc etc.
Now what title would you choose?
Furthermore, are the stories at all what you suspected?
Posted by Jessica Bell at Monday, June 14, 2010