When my mind sways towards the morbid ...

Well, this is my last day (again!) of blogging until 16th August. This time for a REAL vacation. I don't have to work for two weeks! YAY!
So I'm going to leave you with a poem, which was actually inspired by a book, written by a fellow blogger of ours, Karen Gowen. It's called Farm Girl (the book, not my poem).
Now I say inspired, not based on. Do not get these words confused :o) My mind can sway towards the morbid quite often, and in this case it has.

This could probably do with a little tweaking, but here you are anyway ... 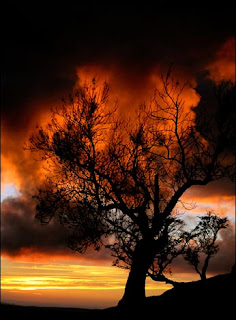 As the fire burns, so does hate
Daddy’s children run through the open gate
The sun is hot and the grass is dry
Mummy cries as crops begin to die
The drought has lasted many months
And the carving tools have grown quite blunt
The baby cries – it tries to breathe
The mother sighs – she tries to weave
Father kills their last little lamb
And collects dirty water from the dried up dam
He prays to the heavens for it to rain
Prays for a savior to wash away their pain
They can no longer live on water and bread
Pretty soon he thinks they’ll all be dead
They huddle together on their collapsing porch
Waiting for the flames to burn and scorch
Believe in miracles, Daddy does not
Behind the pickles, he finds his last shot
To save his family – thier lives he must claim
And believe life must end, to begin again
On shot. Two shots. Three shots. Four?
He pokes his head through the fly wire door
His family lie dead on the crackling lawn
Begging for their souls to be reborn

As the fire burns, so does hate
He listens to it roar, past the open gate
The flames are hot, and his mouth is dry
The time has come
for the last
seed
to
die

Check back on the 16th August. I've got a really awesome surprise for you all during that week, and believe me, you won't want to miss it! ;o)