The Book that Marks the Spot (+Beth's tag)

Here is the excerpt from Marilynne Robinson's 'Housekeeping' which made my heart POUND in highschool, and marked the day I knew I wanted to write too someday. Her novel 'Housekeeping', first published in 1980, is what sparked my interest in literature when I was just 14. She's is still to this day my favourite author. 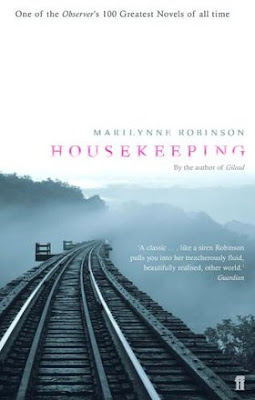 "He would peer at them as if he could read them, and pocket them as if he could own them. This death in my hand, this is ruin in my breast pocket, where I keep my reading glasses. At such times he was as forgetful of her as he was of his suspenders and his Methodism, but all the same it was then that she loved him best, as a soul all unaccompanied, like her own. ... So the wind that billowed her sheets announced her the resurrection of the ordinary. ... And she would feel that sharp loneliness she had felt every long evening since she was a child. It was the kind of loneliness that made clocks seem slow and loud and made voices sound like voices accross water."
Do you have a book which marks the day you knew you wanted to write?

And now for my tag:

And I'm not tagging back because there are plenty of other people tagging!

PS: The first prize winner, layla418, of my contest has not contacted me, so if he still hasn't done so by tomorrow morning, I will draw another winner. Stay tuned!
Posted by Jessica Bell at Wednesday, May 26, 2010

Email ThisBlogThis!Share to TwitterShare to FacebookShare to Pinterest
Labels: Books