The windy mountainous roads on the island where my father’s family roots lie are framed with olive groves and air so crisp you can snap it up like celery. The houses are stained with whitewash and embedded with old-style stiff wooden shutters, tailored by the inbred locals to keep the summer swelter out. They are all painted blue, red or green, but occasionally you may come across the odd pink or orange shutters, which are more often than not, inhabited by the eccentric barmy type who are colour blind, or the young and loaded foreigner who believes that they should revolutionize the island.
Goats meander about the streets, head butting each other senselessly, as they try to escape oncoming cars and scooters. The roosters, the chickens and the geese fire up the locals at the first sign of sunrise. In the morning you can hear birds chirping, cicadas jijiging in the olive trees and dogs barking as the bread truck (a little old red beat up Ute) delivers hot bread to each residency.
At midday, the sun gets so hot that you have to wade through the heat rising off the road before you manage to wade through the Mediteranean waves to cool off. The ocean sparkles a deep turquoise and is as flat and as still as oil. It’s very hard to resist going for a swim at least twice a day during the summer as the heat engraves your skin. If you are on holiday you might as well just spend sunrise to sunset lying on a small empty white pebbled beach – one that is situated in a tiny cove at the end of a private dirt walking track – one that not a single postcard illustrates and not a single local will tell you about. 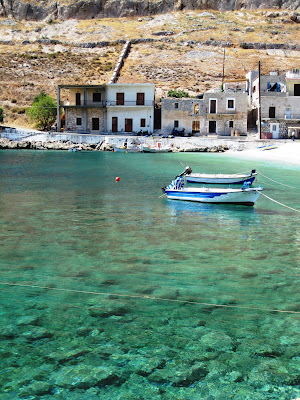 Do you wish you were here? If so, then you'll have to come to Greece ;o)
Don’t forget about my CONTEST!

PS: Holly, (my dog) was missing in the shots yesterday because I had just washed her and she was on the balcony drying off :o)
Posted by Jessica Bell at Friday, August 27, 2010

Email ThisBlogThis!Share to TwitterShare to FacebookShare to Pinterest
Labels: Greece