What will happen to my writing if I keep living here?

As you know, I live in Greece. Everyday, I walk out of my little isolated world of reading and writing, and into the obnoxious and chaotic world of Athens, Greece. I hear Greeks curse, chat about nail varnish and make-up, politics (which to me, in Greek, is incomprehensible), boyfriends cheating, husbands lying, children screaming in public, expensive supermarket prices ... general universal conversation really. Isn't it?
But you know what the difference is with these conversations? They're in Greek. Not only is the language completely different to English, but so is intonation, facial expression, and hand gesture. Emphasis on particular words in a sentence is also completely different. Their way of answering the phone, to us seems ubrupt and rude sometimes, or even doesn't make sense. Would any English speaker answer the phone and say, 'Yes?' or 'Please?' No. I didn't think so. 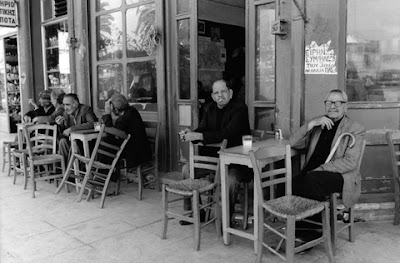 If I keep living in this country, is my idea of a realistic English conversation going to flush the opposite way down the toilet bowl? What's going to happen when my mind is filled with Greek mannerisms rather than English ones? What's going to happen to my writing?
Yes, I do watch English films, read English books, and speak English on a daily basis, but in my world, in my surrounding environment, 'life' is not in English. How am I supposed to successfully eavesdrop?
Am I going to lose touch? Am I going to be able to evolve with the English language? Or am I going to be one of those people who doesn't realise that when someone says 'She's bad', in a particular context, they actually mean she's a strong independent woman instead of misbehaved?
It's scary. Really scary. Is my future as a writer doomed?
Posted by Jessica Bell at Monday, August 02, 2010