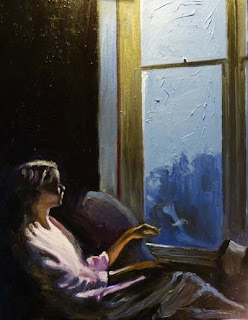 The tiles on the kitchen floor looked like black earthworms, chopped up into quarters, which had eventually rejuvenated themselves inside infected, murky urine. Every time I looked at them I’d see movement. The little sporadic black lines would change position, especially when the moonlight glimmered through the leaves of the apricot tree just outside the kitchen window. The shadows haunted me. I was afraid they’d come to life, and swallow me like polluted quick sand in the middle of the night, when I needed to get out of bed to pee.

It was worse when my parents were cooped up inside the music room, laying down their Gothic guitar riffs, vocals, synthesiser samples, in passionate determination, unaware of the world around them. They wouldn’t have heard me if I had screamed; if I had been in trouble; if the tiles had gobbled me up. I sometimes wondered if they even noticed when I wasn’t there.

Every night, Russell and I would tackle the tiles. And most nights I was more scared than the night before; I couldn’t bring myself to turn the light on, despite being tall enough to reach the switch. Sometimes Russell and I would put ourselves through the fright, despite me not actually needing to pee, simply because we didn’t want to go to sleep.

With Russell by my side, I’d run through the kitchen, holding my breath, until I’d reach the other side of the shiny pink pealing door, that lead to the isolated toilet. It was enclosed in an outhouse type extension, with a glass wall that looked out into the backyard. I was frightened of being in there too. At night the glass was pitch black and I’d sometimes imagine strangers walking up the driveway, looking for a way to rob us, and peer through the glass just as I was lifting up my skirt in preparation to pee.

I’d close the pink shiny door behind me as fast as possible, panting as though I had just escaped a police chase after committing a horrible crime.

“We made it by the skin of our teeth!” I’d say to Russell, inconspicuously trying to see beyond the darkness of the glass.

“Tell me about it,” he’d respond, clicking his tongue with attitude.

I’d comment on the scale of difficulty the kitchen tiles posed that night, and that if it hadn’t been for him, we’d both have been “goners”. I’d try to imagine what Russell had done to save us, and why, but my imagination would trail off like the concentration span of a toddler. The action and reason was beside the point; it was the dialogue that mattered most.

Russell would stay out by the glass wall to keep me safe from predators; I’d catch my breath and sit myself on the cold black toilet seat, and close the toilet door with the foot that was free from dangling underpants.

“Sorry, Russell. No peeking!” I’d exclaim, trying to maintain my dominating tone, yet hesitant volume, so as not to attract any strangers toward the dark glass wall. But most times I couldn’t pee, and I’d sit waiting, for at least a little trickle to hit the water inside the toilet bowl.

Sometimes, in my bedroom at night, when I knew I wouldn’t be disturbed by mum telling me to turn my night light off; when I could feel the vibrations from the music room; hear the same words being sung, over and over; the same guitar chords being played, again and again; the four-track mixing desk clicking and rewinding; the ten-year-old guitar cable crackling through the amplifier; and the screeching feedback my dad would make for the sheer thrill of it; I would sit on my bed and surround myself with my stuffed toys. I would stroke them, and tell them that mummy was busy, so we were allowed to play whatever we felt like. I would be the doctor and they would be my patients.

I would pretend to feed them jelly, just like I saw on TV in the hospital show, and I would give them injections, with my real-life sewing needle and masking tape invention. I’d pretend they were crying from the fear of pain, and I would console them. And when they would cry I would cuddle them, and tell them that everything was going to be OK; that I would always be there for them, no matter what.

“You’re just going to feel a bit of discomfort,” I would say. The doctor had said that to me when he’d chopped out the infected splinter in my hand, an injury I was too afraid to admit I’d had, and covered it up with my sleeve for weeks.
But you forget the pain. It only lasts as long as it lasts, and then mum gets you ice cream afterwards, and the pain becomes obsolete, until you get dropped off at a babysitter’s that smells like soya milk, tofu and marmite, rather than foundation, perfume and lipstick. But then the pain turns into a yearning for comfort, so strong that the emptiness you feel inside tries to get out through tears, but you intentionally prevent it’s exit by muting it with a pillow, a pillow that isn’t even yours; the only thing you can think to do in this stranger’s home to not inconvenience them; and through the realization that you can’t even feel sad in the comfort of your own home, you feel even sadder, until the tears exhaust you and you fall asleep with your teeth clenched.

Russell was even more jealous when I made myself pregnant with my bicycle helmet. I’d stroke my belly, and sing to it, like my mum said she’d sung to me. Sometimes I’d let Russell come out of my wardrobe to stroke my belly too, until I decided it was time to go into labour. I was too embarrassed for Russell to see my naked legs.

“Go back inside,” I’d whisper. “You’re not allowed to watch.”
In one year, I gave birth to about fifty babies, all of which were still-born, and which I mourned by crying inside my wardrobe, hoping that Russell would comfort me. But when I sat inside my wardrobe, Russell wouldn’t be there. I convinced myself that it was because he didn’t like weak dispositions.

When I’d decide to get back into bed and turn out my night light, Russell would rematerialize, and then disappear through my window, without opening it. He turned into condensation, and the room would go cold. I’d write ‘I heart Russell’ onto the misty glass, then immediately rub it away with the sleeve of my nightdress, in fear of being caught leaving my fingerprints everywhere. My mum didn’t like it when I left fingerprints everywhere.

I didn’t know where he went every night, but I hoped it was somewhere special, somewhere where he would be able to take me one day, perhaps like Peter Pan. But I knew deep down that he would never take me with him, because I never let him be with me all the time. I was mean to him, but I couldn’t help it.

I’d still be lying awake in the semi-darkness, watching the shadows on my wall change shape with every passing car, when my mum would sneak in to check on me. I’d pretend to be asleep, and breathe heavily for it to be more convincing. If I didn’t, she would bend forward, with her ear to my nose, without touching me, to see if I was still alive. She’d run her fingers through my hair and kiss my cheek, and I would shift my body under the covers as though she had woken me up, but I would never open my eyes. Then she’d whisper, “I love you,” before leaving my bedroom door slightly open behind her.

When my parents would finally go to bed, and I’d be drifting off to sleep, I would feel Russell lay beside me. I would feel him stroking my forehead, silently humming an unknown tune. I was the only one who could hear him; I knew it, deep inside. I would never tell him that I was happy he’d returned, and I would never tell him about my insomnia when I was without him. But I hoped that he knew that anyway. I hoped he could understand what went on inside my head. But I knew, that no matter what, he would be there when I needed to pee; when I needed help getting through the tantalizing kitchen, and glass-walled outhouse. Russell knew better than me. He knew that I was just too scared to turn the light on, in dread of facing what I had to face everyday in the daylight, when I’d get home from school—a cold empty kitchen, and a distracted, absent mother to greet me.
Posted by Jessica Bell at Thursday, April 22, 2010