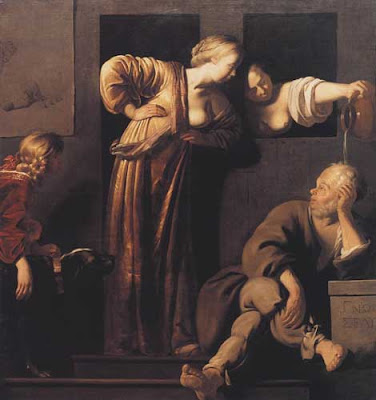 Xanthippe was Socrates' wife and matron of ancient Athens. The couple had three sons, Lamprokles, Sophroniskos and Menexenos, and she is said to have had a horrid temper and to have been the very personification of the constantly nagging wife.

Her contemporaries did not picture her as such a terrible person as the later Romans did. According to later stories, Socrates knew he was marrying a hag, but did so to practice his patience.

A well-known anecdote about the angry Xanthippe is the one where she was so angry with her husband that she threw a bucket of washing water on him. The philosopher then replied: "After thunder comes rain."

Socrates' saying was "Marry or marry not, in any case you'll regret it." This was supposedly in contemplation of his wife.

It's quite funny, that the word for 'blonde' in Greek, is 'Xanthi'. See us westerners have got it all wrong - blondes aren't dumb at all - they're smart! They know that being patient with a philosopher who has an answer for everything isn't going to them any good!
Posted by Jessica Bell at Wednesday, April 28, 2010