Part A: The Altruistic Ape 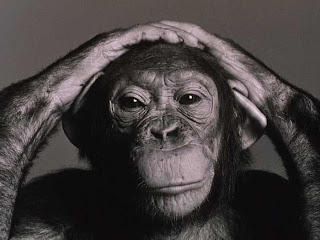 Anyone ever thought about what types of animals have altruistic attributes other than humans? Well among us human good Samaritans are anthropoids, also known as apes :)

Although, I'm talking about absolute artless altruism - like that of an anklebiter. Anthropological studies have shown that apes have the same altruistic aspects as an 18-month old. In 2007, an analysis of apes and anklebiters was held at the Institute for Evolutionary Anthropology in Leipzig, Germany. It showed that apes and anklebiters are both inclined to assist people that they have never addressed in their lives, without any personal gain. Amazing, isn't it?

It's alluring because as we advance in age, I think authentic altruism abates. I mean, of course most of us aspire to aid anyone in need, especially those that are close to us, but who hasn't thought, 'So what will I get outta this?' Be honest. How often do you engage in altruistic acts for someone you hardly know that's in need? Should favours always have to be accrued? Can't we just be appeased knowing that we have assisted someone who needed assisting?
Posted by Jessica Bell at Thursday, April 01, 2010