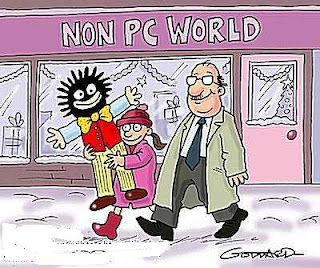 Firstly, I cannot gloat about my use of Gs today. It proved gifficult ;) re my topic choice ... I did, however, do my best!

Can any of you remember Florence Kate Upton's book entitled The Adventures of Two Dutch Dolls and a Golliwogg? It introduced a character named the "Golliwogg", for the first time. He was first described as "a horrid sight, the blackest gnome", but he quickly grew to be a genuinely genial character, and is later given a "kind face".

After publication, the term "golliwog" was used both as a reference to the children's toy and as a generic, racist term for Black people. Goodness gracious me! Why on earth did people disgrace this great character name?

In the early 1980s, in revised editions of Enid Blyton's Noddy books Mr. Golly, the golliwog proprietor of the Toytown garage, was changed to Mr. Sparks. Gee, does this mean, I'm not even given the right to say "Golly gosh" anymore?

In September 2008, a girl living in Stockport, named Amanda Schofield, was grabbed by authorities, finger-printed, and DNA-sampled for garnering a golliwog doll in her window. Does this mean I have to gallivant back to Australia and grub through my garage to garbage my Golliwog books? Am I now a criminal?

In February 2009, in an off-air conversation at the BBC, Carol Thatcher referred to the black French tennis player Jo-Wilfried Tsonga, competing in the Australian Open, as looking like a golliwog. The comment was graded by the BBC as "wholly unacceptable" and Thatcher was given an ultimatum - unless she apologised she would no longer be a reporter for BBC. She had simply been reminded of her childhood toy. How is that an offense? If I said someone looked like a Ken doll, would that be offensive? If I said someone looked like a rag doll, would that be derogatory?

Now, I don't know about you, but I find all this grotesquely over the top. I genuinely believe singling out the golliwog is worse than it being socially unacceptable. I remember those dolls fondly as a child. And given that Australia has got a gigantic multicultural society, the golliwog doll seemed just like any other. If simply owning a golliwog doll is a criminal offense, then lets abolish Barbie dolls too! Barbie dolls are discriminating against women! Right? And while we're at it, let's get rid of all the toy advertisements aimed toward only one gender, because that's sexist too.

What do you think? Do you find the term 'golliwog' offensive? Why? How do you deal with such issues in your writing? Do you refrain from using particular terms because they aren't deemed PC?
Posted by Jessica Bell at Thursday, April 08, 2010