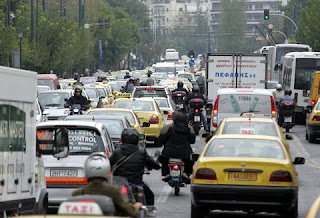 Today I'm going to tell you about the torturous traffic in Athens, Greece.

There is so much traffic in Athens that that there is a traffic law here that states who can and can't drive on certain days. On even-numbered dates, even-numbered registration plates are only allowed to drive. On odd-numbered dates, only odd-numbered registration plates are allowed to drive. But it's useless. Everybody just purchases two cars - one with odd- and one with even-numbered plates. On a side note, I have no idea how anybody can afford it - the average wage here is 600 euros per month. That's approx 800 USD. We are also the most expensive country in Europe - even more than Paris! Can you believe it? It can cost up to 7 euros for a coffee at a cafe! 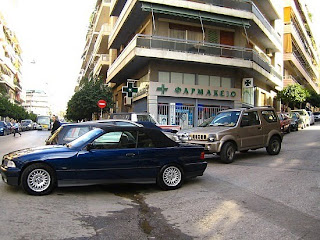 Anyway, back to traffic. Cars double park on roads that can JUST squeeze in two car widths, so that any passing traffic has to drive over the footpath to get through - and the footpath is hardly wide enough for people to walk on anyway. Cars park on the corners of busy intersections, in towing zones (the point of having a towing zone is beyond me because I have never seen a tow truck here in my life, and I've been here for 8 years), on footpaths, in the MIDDLE of open squares, in lane ways, I'm sure there are plenty of other places I can't even think of right now. 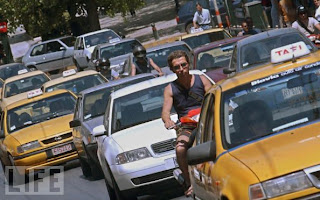 There is no point in having lines to separate the lanes on the road either, because no one gives a shit about them. People drive in two lanes at once, people even drive in the emergency lane on the highway - and it's accepted, no one pays any attention to speed signs - AT ALL. No one gives way to ambulances. Buses can be seen driving even faster than the cars. There are signs on the highway that say "Caution - high death rate for the next 3km". What are you trying to do? Give me a heart attack before I even have a car accident? 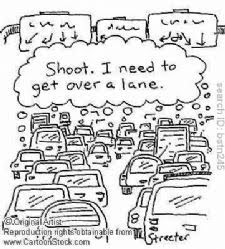 Dangerous city to drive in. That's why I just avoid it at all costs. I only ever drive if I have to go out of the city - and even then it's a nightmare - panic attack, tears, talking to myself, cursing, horn honking, negotiating smart maneuvers to escape bottle necks. Ugh ... OK. That's enough. Just writing about it makes me feel like I'm driving ...

Oh, and just for your information. This is what happens every couple of months when the garbage collectors go on strike: 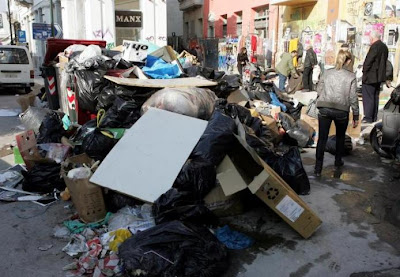 And now for something to tickle your fancy - two turtles in our botanical gardens ... um ... what's it called that they're doing here? hehehehe ... 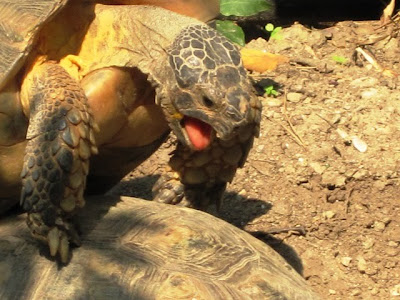